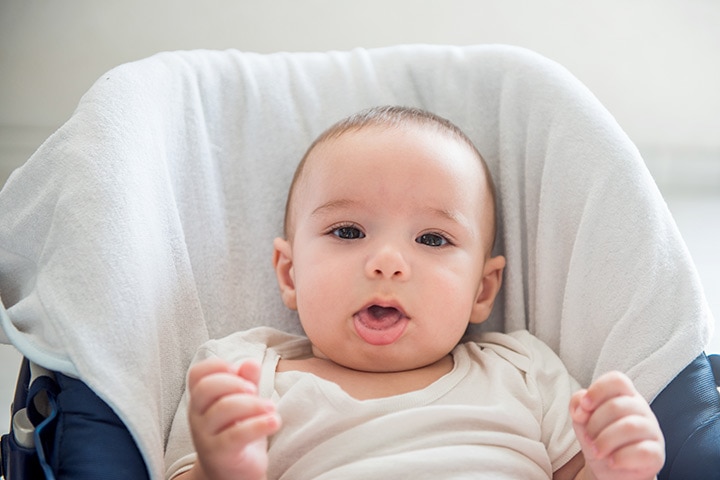 An occasional cough wouldn’t bother you. But if your baby coughs continuously and for days together, it is definitely worrisome. They wouldn’t sleep or feed, and can even get breathless. You want to help them in whatever way possible but may not know what to do.

MomJunction tells you about the various reasons for a cough in babies, its causes, and treatment.

Why Do Babies Cough?

Coughing is a natural protective reflex of the body to get rid of any obstructions that block the airways. Coughing helps clear any harmful substances such as dust or food particles that go in accidentally. It also helps remove excess secretions of the respiratory system, such as phlegm (1).

When there are secretions, it is referred to as a wet cough. Otherwise, it is called a dry cough.

What Causes A Cough In Babies?

The symptoms that your baby displays can help you determine the causes of a cough. Here are 11 leading causes of coughing in babies and toddlers.

It usually begins as a wet cough and then becomes a dry cough as the baby gets better.

This type of coughing is interrupted by a peculiar inhalation noise that sounds like a whoop. The cough is intense and quite distinctive from other coughs.

Lung infections lead to the formation of phlegm in the lungs, causing a wet cough. Sinus infections also result in a wet cough when the infected fluids from the sinus are pushed into the throat.

Coughs due to allergies are usually dry, with very little phlegm if any (11).

[ Read: How To Relieve Cold Symptoms In Babies ]

A cough due to this would be wet, but not contain phlegm or mucus. Instead, the infant would spit out small quantities of stomach contents, such as milk, when they cough.

A persistent dry or wet cough, which can bring out a lot of mucus from the lungs (16).

It is a sudden outburst of a cough that usually occurs while eating and drinking when the food or the secretions go down the airways instead of the food pipe. In such cases, the baby or toddler will cough and gag.

A dry cough could be a symptom of heart conditions while a wet cough is usually the result of respiratory problems. In both the cases, the baby will present other symptoms like fatigue and poor appetite that supersede the symptom of coughing.

They are dry coughs with usually no signs of distress or any other symptoms. The baby/toddler would otherwise be healthy and normal.

A cough is often one of the significant symptoms of the conditions mentioned above. It can be prominent in some cases and may go unnoticed by the parents in others. Nevertheless, remember that in some scenarios, a coughing baby or toddler needs immediate medical attention.

When To Take The Baby To Doctor For Cough?

Take the baby to the doctor right away if any of the following symptoms accompany coughing:

The doctor will suggest the right course of treatment for the baby’s cough, depending on the cause behind it.

[ Read: Symptoms Of Bronchiolitis In Babies ]

How Is Coughing Treated In Babies?

Treatment for coughing could include one or more of the following options.

Always consult the baby’s doctor for treating cough, and avoid the use of generic, over-the-counter (OTC) cough medicine for the baby.

Can You Give OTC Cough Medicines To The Baby?

No. Never give any OTC cough syrup or tablets to a baby or toddler.

The US Food and Drug Administration strongly advises against the use of cough medicines for children below the age of two years (22). The agency also states that such medicines can adversely affect the child’s health and even cause life-threatening side effects.

The American Academy of Pediatrics states that it is best to stay away from OTC cough medicines until the age of four years (23). Instead of reaching for that bottle of a cough syrup, try a few home natural remedies after consulting the pediatrician. Better yet, try and prevent a cough in babies with the precautions we tell you next.

[ Read: What Causes Croup In Babies ]

How To Prevent A Cough In Babies?

Preventing coughs in babies is all about avoiding things that could trigger or cause a cough. So, here is what you can do.

While coughs are mostly benign, they become a cause for concern when they persist for too long or are accompanied by other symptoms. If you sense something is wrong with the baby’s coughing, then do not hesitate to take them to the doctor. Early diagnosis and initiation of treatment can play a crucial role in successful treatment and management of several serious illnesses that can trigger a cough.

Rohit Garoo took writing as a profession right after finishing his MBA in Marketing. Earlier he graduated with a Bachelor’s degree in Botany & Zoology from the autonomous St. Xavier’s College in Mumbai. Rohit has also done a Stanford University certification course on breastfeeding. This botanist-zoologist turned writer excels at life sciences, and at MomJunction he writes everything about pediatrics and maternal care. In between writing and being overly curious, he spends time cooking, reading, and playing video games.
LinkedIn profile – linkedin.com/in/rohit-garoo-263115aa
Share on Facebook
Share on Twitter
Share on Pinterest
Share on LinkedIn