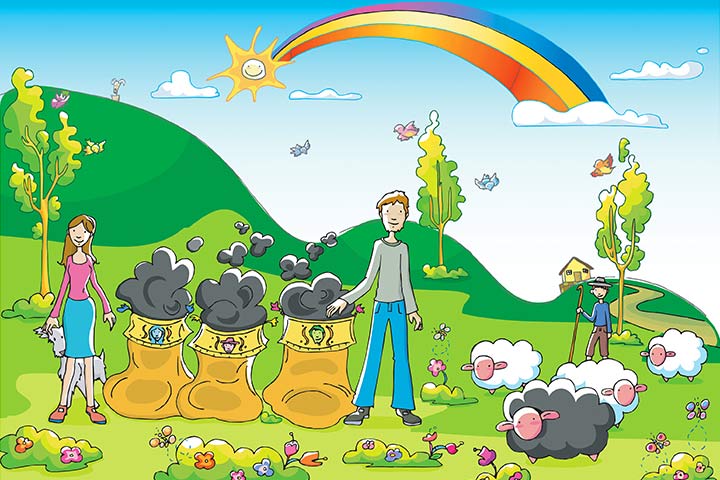 Nursery rhymes, or the Mother Goose rhymes as called in North America, have been in usage since the 19th century. However, one of the earliest poems, in French, dates back to the 13th century. Rhymes were recorded in English plays from around mid-16th century. Tommy Thumb’s Song Book, printed around 1744, was the first nursery rhyme collection.

Not all rhymes have a happy background, as researchers say that some were written in the backdrops of plague, medieval taxes, religious persecution and prostitution (1).

We bring you a list of 7 best English nursery rhymes, their origin and background here:

It was written by two sisters Ann Taylor and Jane Taylor and was published in 1806 in ‘Rhymes for the Nursery’.

Though we get to hear the first stanza often, there are four more stanzas to the original poem.

The rhyme teaches children about the use of similes such as ‘like a diamond in the sky’, where the star is compared to a diamond. This helps in improving the English language.

2. Old MacDonald Had a Farm:

The rhyme is about the animals on the farm of one MacDonald. Each verse has a different animal: cow, duck, pig, sheep, hen, etc.

It helps kids memorize the names of the animals and relate them with the sounds they make.

It is said to be a satire on the wool tax imposed on the exports by the Plantagenet King Edward I (the Master) in Britain in 1275. Another version takes the rhyme to the era of King Edward II (1307-1327).

The rhyme explains the child about the origin of wool.

The rhyme was first published in the UK in 1833 and a decade later in the US. It is about three kittens who lose their mittens, and then find and soil them.

[ Read: How To Teach Toddler To Write Better ]

5. Wheels On The Bus Go Round And Round:

The folk song is said to have originated after 1939, and written by Lydia Ulsaker. It is popular in the UK, US, Australia, and Canada.

There are various interpretations of the song, some simple and some complex ones relating the wheels of the bus to the human life cycle.

Kids will have fun singing it while traveling in a bus. The journey will give them a hands-on experience of the song.

6. Jack And Jill Went Up The Hill:

The poem was first published in 1795, two years after the ‘Reign of Terror’ in France.

The story is said to be about King Louis XVI and his wife Queen Marie Antoinette, termed as Jack and Jill. ‘Lost his crown’ refers to the king being beheaded during the French Revolution. ‘Jill came tumbling after’ means the death of the queen soon after the king’s beheading.

Jack and Jill is also known as Jack and Gill, having changed its spellings over the generations.

The rhyme was first published in 1744 in Tommy Thumb’s Pretty Song Book with the opening lines of ‘Hickere, Dickere Dock’. Then it appeared in Mother Goose’s Melody with ‘Dickery, Dickery Dock’.
It has no particular meaning but is probably aimed at teaching kids to tell time.

Why Nursery Rhymes Are Important For Your Child:

Rhymes are an inevitable part of early education for children. You are amused when your little one comes home from school and enacts the rhyme that she learned in the class. Here are a few ways in which rhymes can do good to your kid:

Writing is my hobby and my profession. I amaze myself whenever I look back and see that I have already spent 15 solid years writing and editing across newspapers and online media, covering features and business news with equal élan. MomJunction coincided with my motherhood, and as a mother of two, there is a lot to give and take from MJ.
Share on Facebook
Share on Twitter
Share on Pinterest
Share on LinkedIn