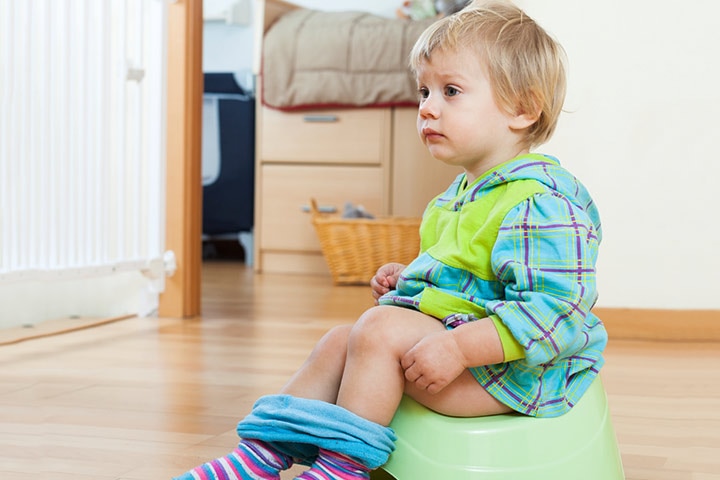 Diarrhea is common in toddlers but it doesn’t make it any easier for parents to handle. It vexes the parents, and puts the toddler under severe physical stress. There are many reasons for a toddler getting diarrhea. But how does one deal with and manage the condition? Also, are there any home remedies to tackle the problem? MomJunction answers all your queries on diarrhea in toddlers.

According to the World Health Organization (WHO), diarrhea is defined as the passage of three or more watery stools per day. Loose, non-watery, and paste-like stools are not diarrhea and passing many firm/normal stools in a day is also not diarrhea (1). Acute diarrhea lasts for a few days to a couple of weeks while persistent diarrhea is when the watery stools go beyond two weeks.

The diarrhea stools can happen several times in a day, and it determines the severity of the condition. The American Academy of Pediatrics (AAP) defines diarrhea on the following scales of severity (2):

Since toddlers eat a variety of solid foods and also self-feed, they have a substantial risk of developing diarrhea. There are numerous reasons why a toddler can get diarrhea.

What Causes Diarrhea In Toddlers?

The following conditions and agents can cause diarrhea in toddlers:

Infections of the gastrointestinal tract are contracted by consuming contaminated food and water. Some pathogens can even be ingested through oral contact with contaminated objects such as toys. Several pathogens can cause diarrhea, but the following are the most likely to affect toddlers:

It occurs when a toddler eats stale food that has colonies of bacteria, fungi, or other microscopic organisms. Unlike gastrointestinal tract infections where the pathogen directly attacks the body, in food poisoning, the diarrhea is caused by the body’s reaction to the toxins released by the pathogens within the stale food. Food poisoning can cause yellow watery diarrhea with blood, and the other symptoms include nausea, vomiting, and fever (12).

Yes, fFruit juices can cause mild to moderate diarrhea when consumed in excess or used as an exclusive source of nutrition for the toddler. Fruit juices include juices you make at home and the packaged variety you purchase from the supermarket. In fact, packaged fruit juices contain added sugar and even preservatives that are not good for a toddler. Juices have a concentrated amount of nutrients that is overwhelming for the toddler’s digestive system to absorb. As a result, most of the juice is expelled undigested in the form of watery diarrhea. This kind of diarrhea has no symptoms besides watery stools. (13).

Food allergies occur when the toddler’s immune system mistakes a food protein as a pathogen and mounts an attack. If the toddler’s immune system has a predisposition to an allergy, it will mount an allergic reaction with symptoms such as stomach pain, vomiting, and diarrhea (14). Celiac disease is an example of a food allergy that where the body shows an allergic reaction to grains such as wheat, barley, and rye (15).

It is a group of genetic diseases that cause severe inflammation in the inner lining of the digestive tract. Persistent diarrhea with blood is one of the prominent symptoms of the disease. While there are several IBDs, the most common ones to affect toddlers are ulcerative colitis and Crohn’s disease. These illnesses can cause diarrhea that lasts over a month. As IBDs are genetic, there is no treatment nor can they be diagnosed before birth (17). Nevertheless, medications subdue the symptoms and help thetoddler live a healthy normal life.

This condition causes the nerves of the intestines to become overly sensitive leading to spasms of intestinal smooth muscles. The abnormal movement of muscles causes severe cramps and diarrhea (18). It is not known what causes the irritable bowel syndrome, but it is treatable through the combination of lifestyle changes and medications (19).

Diseases that interfere with the function of the pancreas or block one of its ducts can eventually cause diarrhea. The most common ailment of the pancreas to affect toddlers is cystic fibrosis. The disease has several symptoms and diarrhea is one of them. Diarrhea due to cystic fibrosis is particularly greasy and has an intense foul smell. There is no treatment for cystic fibrosis, but efficient management of the symptoms can help the toddler live a healthy life (20).

In this condition, the thyroid gland produces an excess of the thyroid hormone. Hyperthyroidism can itself be a result of some other disease or condition. The surplus thyroid hormone interferes with the healthy function of various organs including the intestines. It can lead to abdominal discomfort and chronic diarrhea (21).

[ Read: Loss Of Appetite In Toddlers ]

Toddlers may feel hotter during summer months, leading to heat exhaustion. The condition can cause several symptoms such as abdominal cramps and diarrhea (22). Heat exhaustion can be prevented by ensuring the toddler is in a cooler environment and providing adequate fluids to cure heat-related diarrhea.

10. Side effects of medicines:

Some medicines, such as antibiotics, can cause diarrhea as a side effect. Antibiotics do not just kill the harmful bacteria, but also affect the number of good bacteria that facilitate digestion. A decrease in the population of good bacteria can affect the functions of the intestines (23).

The cause of diarrhea decides how long the condition spans. Stay alert to any subtle symptoms that point towards diarrhea in toddlers.

What Are The Symptoms Of Diarrhea?

Diarrhea is a symptom in itself and an indicator that something could be wrong with the toddler’s health. But be watchful of the following indicators that may immediately not seem like diarrhea:

Certain situations warrant you to rush the toddler to a doctor.

When To Rush Your Toddler To A Doctor?

It is best to take the toddler to a doctor when you notice the following symptoms: (24):

Timely assessment by a pediatrician can help in initiating the treatment for the toddler.

How Is Diarrhea In Toddlers Treated?

The treatment of diarrhea depends on the fundamental cause. The doctor will diagnose the primary reason after analyzing the toddler’s medical history and suggesting a series of blood, stool, and urine tests. The following treatment steps are commonly taken to provide relief from diarrhea:

There are several over-the-counter (OTC) anti-diarrheal medicines such as Pepto-Bismol available. But never give such medicines to your toddler. According to the US Food And Drug Administration (USFDA), such medicines contain chemicals that may harm the toddler (25). Only follow the pediatrician’s prescription. Do remember that taking the toddler to a doctor is vital to prevent the onset of any complication.

What Are The Complications Of Diarrhea In Toddlers?

Dehydration is the single most critical complication of diarrhea in toddlers (26). It happens due to the rapid loss of water and electrolytes from the body due to watery stools. The following are the indicators of dehydration in toddlers (27):

Dehydration is the reason why diarrhea can be dangerous for a toddler. But the complications can be prevented at home.

What Are The Home Remedies For Toddler’s Diarrhea?

Diarrhea can be managed at home through the following procedures:

Along with breastmilk, you need to feed other foods that are soft on the digestive system.

What To Feed A Toddler Having Diarrhea?

Stick to the following foods when your toddler has diarrhea (31):

Remember, your toddler loses sodium during diarrhea, so add some salt to your toddler’s food. A toddler needs no more than 2g of salt per day (32).

When feeding vegetables, always puree them so that it is easy for the toddler to eat and digest. If the toddler has formula, then your doctor might suggest a formula that contains electrolytes for added nourishment. For the best nutritional, consult a pediatric dietician, who can design a diet plan suited to the disease/condition that has led to the toddler’s diarrhea.

What Are The Foods To Avoid During Toddler’s Diarrhea?

If the diarrhea is the result of a food allergy, then the toddler must avoid that food item. In case of lactose intolerance, avoid milk-based formula. A pediatrician can suggest formulas that are non-milk based or have hydrolyzed proteins, which are easier for the toddler’s tummy to digest (33).

Also, avoid the following food items when your toddler suffers from diarrhea (34):

Diarrhea is difficult for the toddler; therefore take every care to prevent its onset. And the preventive measures are not difficult to follow.

How To Prevent Diarrhea In Toddlers?

The following measures will make it easy to avoid diarrhea:

Below, we address some additional questions about toddler’s diarrhea.

[ Read: Symptoms Of Rotavirus In Toddlers ]

1. Can probiotics cause diarrhea in toddlers?

Probably. Probiotics are food supplements that contain the “good” bacteria, which are naturally present in the gastrointestinal tract. However, when consumed for the first time, probiotics may cause a mild allergic reaction and diarrhea is one of its symptoms. Nevertheless, experts state that probiotics are usually safe, but it is better to consult a pediatrician before using any probiotic supplement for the toddler (35). Homemade yogurt is also a probiotic and can be safely given to the toddler. In fact, probiotics are considered helpful during diarrhea although there is not enough evidence to prove it.

2. Can the color of toddler’s stool indicate diarrhea?

Not necessarily. The color of the stool varies naturally depending on the food consumed. Different colors indicate different conditions or could just be a normal effect of a food (36). However, the consistency of the stool, which could be watery or firm, and its frequency is a significant indicator of diarrhea. The presence of blood or red-colored stool is undoubtedly a sign of worry, but it can happen even with firm stools, and is not limited to watery stools.

3. Can teething cause diarrhea in toddlers?

No. Teething does not lead to diarrhea or any other gastrointestinal problem (37). If your toddler is sprouting teeth and also has diarrhea, then it is a mere coincidence. Do not delay the treatment for diarrhea assuming that it will cure once the toddler has teethed.

4. Is BRAT diet helpful during diarrhea?

Probably. BRAT stands for banana, rice cereal, applesauce, and toast. These foods are recommended for toddlers with diarrhea, so you could give your toddler a BRAT diet. However, it will not necessarily cure diarrhea. Toddlers who throw up too often are not recommended bananas. Consult a pediatrician or pediatric dietician before choosing a specialized diet for your toddler with diarrhea (38).

5. Can too much milk cause diarrhea in toddlers?

Milk can cause diarrhea only when the toddler is lactose intolerant (39). A healthy toddler with no intolerance or allergy will not develop diarrhea due to regular milk consumption. On the contrary, excess milk consumption can lead to constipation among toddlers (40).

Mild and moderate diarrhea are not serious conditions, and you might begin with some home remedies before taking the toddler to a pediatrician. Rehydration, rest, and care can provide relief to the toddler at home while precautions eventually keep the problem at bay.