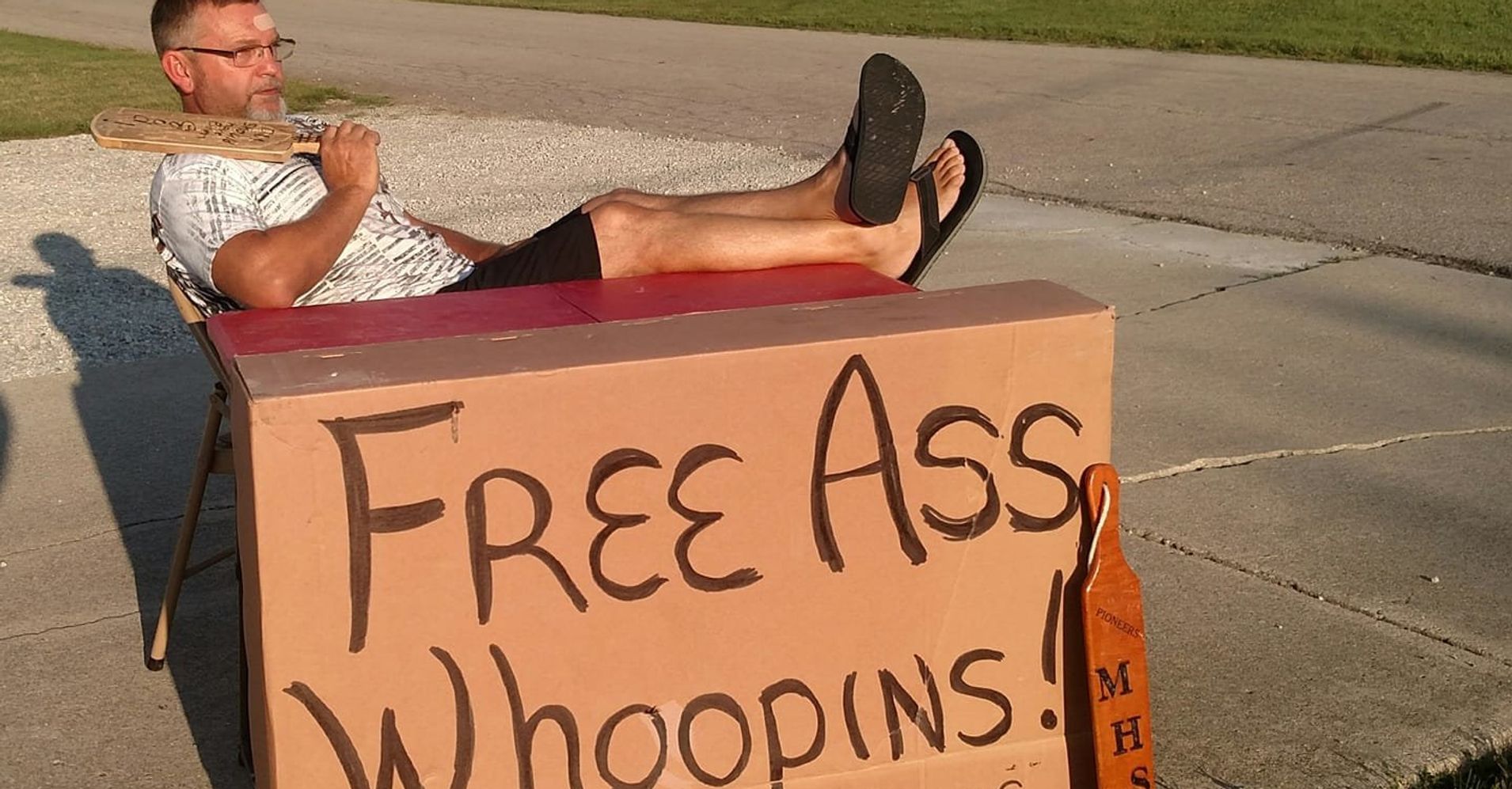 A father of five in Muncie, Indiana, offered “free ass whoopins” to parents of unruly kids on Facebook and found himself smack dab in the middle of a debate on corporal punishment.

Last week Dwayne Stamper posed for a photo showing him sitting in his driveway and holding a paddle behind a cardboard sign that reads “Free αss whoopins!”

To make sure, no one missed his point, Stamper included this caption:

“Parents, your kids need a whoopin? Summer can’t end fast enough? Stop by, I’m set up! No kids over 13…. They may whoop me.”

But the reaction to the photo has been as polarizing as corporal punishment itself.

Many people commented that they were spanked as kids but turned out OK, while others called Stamper “a prime example of what’s wrong in the USA.”

He told Yahoo he was inspired to make his “generous” offer after witnessing a boy about 5 years old who “wouldn’t stop crying because he couldn’t have a piece of gum.”

Stamper said that he asked the boy’s mom if she wanted him to take care of the situation but that she and the child’s grandmother told him the kid was spoiled and it wouldn’t work.

“A few minutes later, the boy was still crying and I told his mother, ‘Lady if you bust that a**, he will be quiet. I got whoopings when I was growing up and I learned how to be quiet,’” Stamper said.

He elaborated on the encounter on Facebook and said, “You don’t have to beat your child but you do have to show them others in this world don’t wanna hear their crybaby little ass!”

Stamper told Yahoo that he believes “kids should fear their parents a little” and too much freedom leads to behavior problems.

He said he smacked his kids only when they were under the age of 13.

“Kids who haven’t had a whooping by the age of 13 can’t be changed by a paddle — they have no fear,” he said. “Child abuse is smacking a child with your hand or fist anywhere other than the butt.”

Many parents may agree with Stamper’s feelings on spanking kids, but evidence doesn’t back it up.

Elizabeth Gershoff, a professor of human development and family sciences at the University of Texas, said there is no evidence that spanking is necessary or effective for correcting a misbehaving child.

Research clearly shows that spanking is ineffective at teaching children how to behave appropriately in the future. In fact, spanking actually increases children’s disobedience, problem behavior and aggression.

It also increases their likelihood of developing mental health problems such as depression or anxiety.

Meanwhile, the American Academy of Pediatrics argues against spanking or other physical punishments because they teach aggressive behavior and become ineffective if used often.

Science be damned — Stamper insisted spanking worked for him.

“I’ve argued this the last few days,” he told HuffPost by email. “If I spanked my kids for their behavior … They sure listened even better! It worked for me, it worked for my parents, it worked for my grandparents. I knew if I got in trouble in school when I got home I would get a whoopin. As a kid I didn’t want a whoopin so I behaved.”

He added, “Most who disagree don’t have kids.”

Still, he concedes some kids don’t need a whooping.

“My daughter never got one but the boys did,” he said.