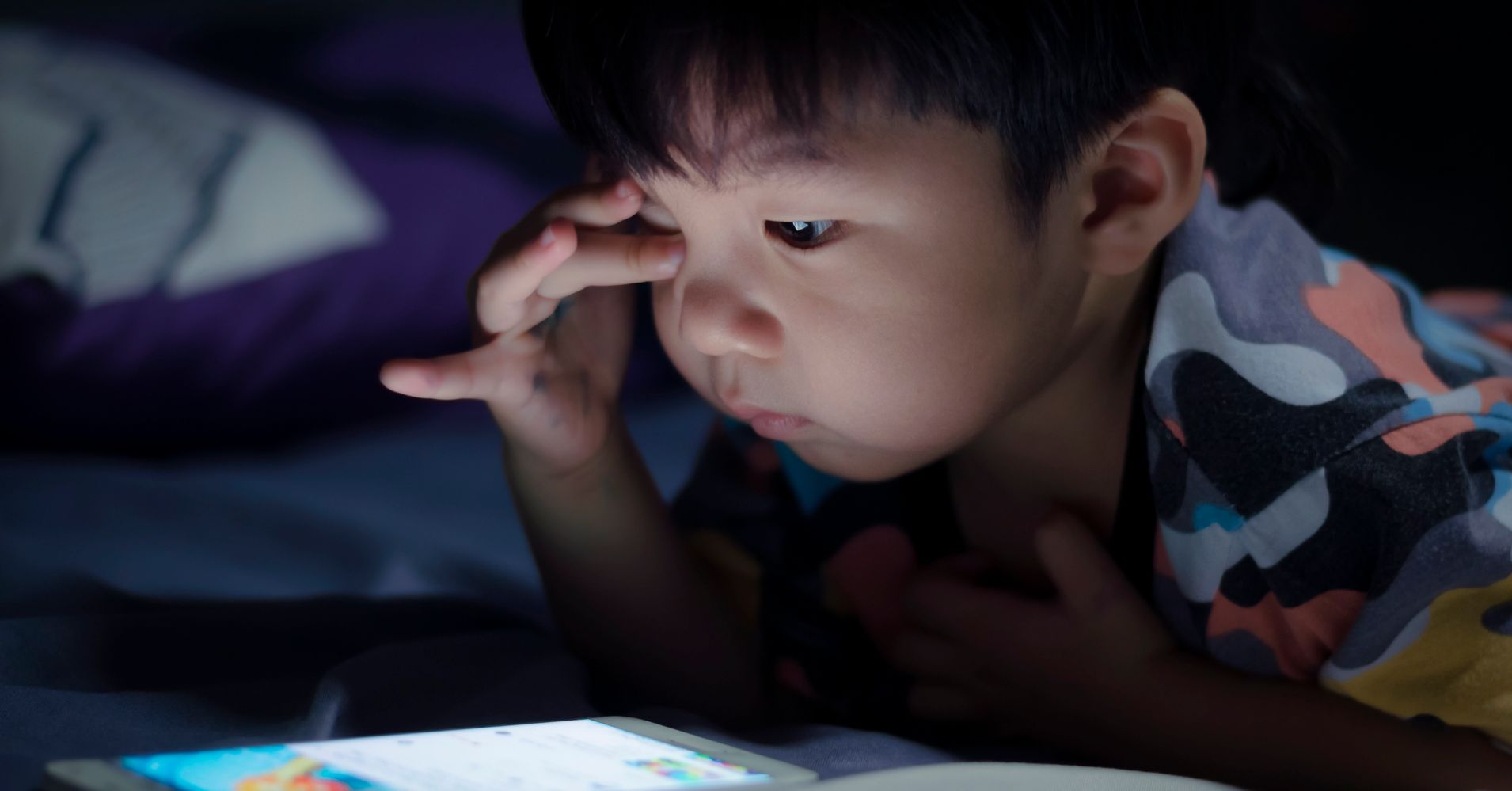 Parenting in 2018 brings with a whole host of new challenges, especially when it comes to “screen time.”

The American Academy of Pediatrics recommends limiting screen use to one hour per day of “high-quality programs” for children 2 to 5 years old and placing “consistent limits” on screen time and types of media for kids 6 and older. But how do you make this work on a practical level?

We asked the HuffPost Parents Facebook community to share what screen time rules have worked for their families.

While every family is different, and it is ultimately up to individual parents to determine what is best for their children, here are some approaches that have worked for others.

“We always do a countdown ― ‘five more minutes,’ ‘three more minutes.’ It helps cut down the anxiety of him being in the middle of something and then having it taken away. We also set limits within our devices and only put kid friendly apps where he is allowed.” ― Kirsten Britain

“We use the kitchen timer on the microwave, so when it beeps she knows it’s time to put it away.” ― Rachelle Lowers

“The kids set a timer on their iPads, and when their time is up (20 minutes on weekdays, one hour on weekends), then it’s up.” ― Rinna Tablante

“Our screen time is scheduled and pretty much only TV. We have an old Kindle Fire that has a few games and a Leapster, but they’re rarely used. TV time is after lunch and after supper ― a half hour or so after lunch and a movie’s worth (1-1.5 hours) after supper.” ― Katie Kilsdonk

Out Of Sight, Out Of Mind

“Our TV lives in our family room in our basement, out of sight = out of mind. TV only on the weekend and only about an hour each day. There are a million other ways to entertain yourself. Honestly, I think little kids watch way too much TV. No iPads or laptops either. My kids are 6 and 8.” ― Amanda McAllister

“My younger kids don’t have their own technology besides access to a TV in their playroom. I would never trust them with their own tablets or a computer. Mostly because they break things.” ― Robyn Bourgoin

“Hide any tablets. Tell the kids to go ride a bike.” ― Danielle Bartran

“Screen time is earned for getting ready for school in a timely fashion and after school as a way to decompress from the day for a while before starting homework and evening routines. Kindle for Kids is great because you can make them read books before earning game time as well (and can be set to automatically shut off after a certain amount of time).” ― Kim O’Connor Crance

“We have a chore chart for earning time ― five minutes for making the bed, three for taking the trash out, five for laundry, etc. No time earned, no screen time. Screen time starts after homework is done.” ― Megan Spiller

“We have a system for her to earn screen time by reading. She’s in Grade 2, so she’s learning to read, and this is the priority.” ― Elyssa Katherine Bisset

“They have three basics before screens can even be turned on: homework, instrument practice and laundry. I bought a pack of cheap digital timers on Amazon that they can easily set themselves and pause (for bathroom breaks or if we stop for dinner, etc.). I still get fairly lax on weekends or school breaks, but it’s a great system for keeping school days under control.” ― Carrie Kindt

“Our child doesn’t have a tablet, and she won’t have one for quite a while. We also have the cheap cable package, so no Nick Jr. or Disney Channel. Our daughter can earn TV time (she mostly watches educational songs and videos on YouTube) by having good behavior at home and preschool. As she gets older, screen time will continue to be earned, not just given.” ― Wendy Pitoniak

“For my middle school kid, I said if your progress report has X, no phone until it’s up to Y. One week without the phone, and it was up to Y. My husband and I are constantly pushing for more outside time, and we pay a small amount for chores.” ― Yvonne Hudson

“My daughter watches some TV and some movies and knows the tablet or phone are reserved for very specific situations. She’s not quite 3 but if she asks, and we say no, we redirect to a different activity. Hoping it continues that way.” ― Kerry Marsh Wichowski

“My daughter’s school encourages screen time, but it’s more of utilizing it for learning. During the summer time, we use checklists that have things like, ‘practice reading for 30 minutes,’ ‘do something creative for 30 minutes like Play-Doh or Legos,’ ‘play outside for 30 minutes’ … usually she gets so wrapped up in the activity that she forgets she wanted to play on her tablet.” ― Rachelle Lowers

“What finally worked for us during the week was stopping screen time one hour before bed (bedtime is 8 p.m.). So the bedtime show/game has to start by 6:30 ― which means all homework except bedtime reading has to be done by 6:30 too. Some nights my son has archery or scouts till 6:30/7, so no screen time those nights typically. The weekend is different of course.” ― Sarah Marie Bliss

“We do no screen time during the week. Then Friday night is family movie night. We still limit it on the weekends, but it’s more often turned off because we have so much going on.” ― Crystal Barnes

“My kids aren’t allowed any video games on school nights. On weekends though, after chores are done they are free to enjoy their weekend.” ― Pamela Januchowski

“We told our 5-year-old that the pediatrician said no screen time on weekdays. So now the TV and iPad are only on Saturday and Sunday.” ― Jennifer Kellogg

“No internet or video games during the school week, period. The only leeway is any need to do school work research. He doesn’t have texting or his own phone number. He can play video games on the weekend after chores are done and as long as his behavior is kind to all. Our 12-year-old isn’t a fan of these rules. But his father and I are a united front, so the child eventually stopped arguing about it. The only trick: Say NO, and mean it.” ― Gina Elliott Proulx

“During the school year, we don’t let our two youngest use it Monday through Friday. My oldest self-manages really well, and uses hers for homework, etc. We check hers but haven’t found the need to cut her off during the week.” ― Darci Lewis

“We aim for no tablets or playing with our phones during the week. We permit some TV since it’s easier to break them away from it. On weekends, they can use the tablets here and there throughout the day. But we set the device timers for 15 minutes so it doesn’t go on too long each time.” ― Eileen Conlon Blanco

“We only use the tablet in the car and during travel. Because of my commute to/from work and daycare, he gets a solid chunk of time with the tablet and then is running around and playing once we get home.” ― Hollis Evans

“We stopped cold turkey. I have no problem with movie nights or watching one show before bed as a family, but we do no tablets or iPads at all unless we are on a long flight. Now the kids play and read.” ― Regan McDonald

“Audiobooks are a great alternative. We cut TV cold turkey about three years ago. It was hard for the first two weeks, but we started listening to audiobooks and podcasts together and it helped ease the transition. Now, iPads are locked to Epic or Audible, and kids can listen to audiobooks with headphones on whenever they want. We only do family movie nights on Friday and Saturday evenings.” ― Oz Douglas

“Find things to do together. Take a walk, bike ride, play board games, card games, read, do laundry together.” ― Kathie Hilliard

“We put all our board games out in the open. We are a big board game family and this helps us all reconnect, have fun, and learn together with no screens involved.” ― Bri Lutz

“With young kids, rotating toys really helps. When all their toys are out, they tend to get bored more easily.” ― Jenna Stensland

“If it’s nice enough outside, not pouring rain/storming or freezing cold, then out they go. No ands, ifs or buts. I spent my entire childhood playing outdoors, I’m trying to give my kids that same experience. They watch cartoons sporadically during the week, and I haven’t bothered to replace the needed battery on our iPad so other than their toons, no screens. It works for us, but we have a big yard and my kiddos are still young. So I am lucky I have the option to shoo them out and no phones to battle over. Do what works best for your family though!” ― Jennifer Hershey

“If it’s a nice day and they are indoors, they are assigned chores! Works great. They spend more time outside and devices aren’t allowed out!” ― Carrie N Mike Lehmann

“My 7-year-old doesn’t know the password to the iPad. We have also started having him play an educational app (like DuoLingo as he is learning Spanish) before he can use it for what he wants (parent-approved options). We also set a kitchen timer so we can keep track of how long he is on it.” ― Erika Chaney

“With the Google Family Link app, we set a one hour per day timer, so when the time is up, the screen goes off. An adult must approve all apps before they can be downloaded, and there’s a timer that let’s us know exactly how the time was used. Too much time on YouTube and not enough learning games means we delete YouTube.” ― Krystal Kilpatric

“We have Google’s Family Link app and have parental controls on all their devices (except school computers), so we can turn off their phones when we need to and just have them put their computers in their backpacks before bed.”― Patrice Caraway

“During the summer, I use the Our Pact app.” ― Darci Lewis

“We have a phone app called ESET Parental Control and settings on our router that allow us to set on and off times for each device.” ― Patty Johnson Dobrowski

“We use the Circle with Disney device.” ― Kelly Farrell Ziek

“Finally figured out how to turn off the autoplay feature on Netflix and Amazon!” ― Sarah Seiglie

“We watch the apps they use. We banned YouTube. I also have a kid on the spectrum, so I cannot completely take it away as he uses it to communicate sometimes. He’s learned to only use it as a calming tool, barely on it anymore.” ― Jessica Cozza

“My 7-year-old son can use electronics as much as he wants as long as he behaves and does what he should when he should. Otherwise, they get taken away as punishment.” ― John Ayers

“There’s no set rule. We have found that balance and flexibility work best. Sometimes they can have tablet time, sometimes we say no and suggest another activity. Sometimes we do family movie night, like tonight, and sometimes we play games. Because of this, they enjoy their screen time, but they love doing stuff as a family even more.” ― Amanda Kirkland

Quotes have been edited and condensed for clarity.