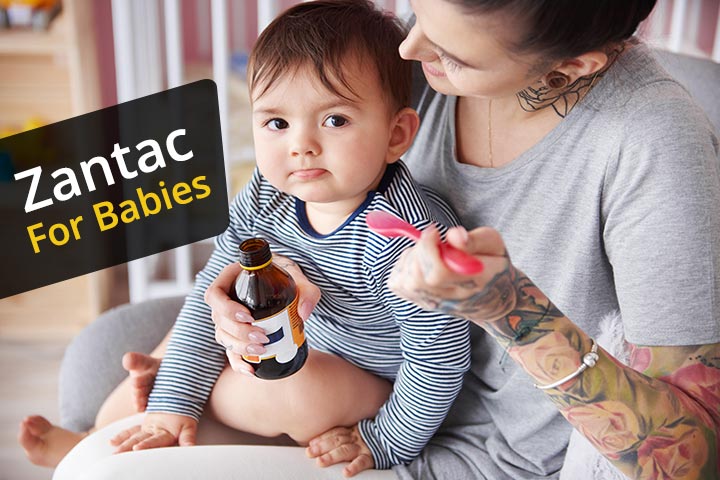 Excess production of acid in the stomach and heartburn is a universal problem. It does not spare even infants. There are several medicines to address this problem, and ranitidine, sold under the brand name Zantac, is one of them. But can babies have Zantac? Is it safe to give an infant this medicine to treat heartburn?

In this article, MomJunction addresses these questions and more about using Zantac for infants.

Zantac is the brand name for the generic antacid compound called ranitidine (1). Ranitidine is a type of histamine-2 (H2) blocker and is particularly used to suppress the stomach cells from producing excess acids and thus prevent heartburn.

Can A Baby Have Zantac?

Yes, babies can have ranitidine (Zantac), but only on a doctor’s prescription (2). Never give Zantac to babies and toddlers unless advised by a pediatrician. When administered in the right dosages, Zantac can be effective and not have any side-effects.

What Is The Right Age To Give Zantac?

Zantac is usually prescribed to babies of at least a month old (3). A pediatrician will explore non-pharmacological treatment, change in maternal diet, and other safer medical alternatives when the baby is less than a month old.

What Is Zantac Used For In Babies?

Ranitidine (Zantac) is prescribed to treat the following conditions in infants (4) (5):

What Is The Dosage Of Zantac For Babies?

Usually, about 1-2mg of Zantac per kg of the baby’s weight is the prescribed single dosage. No more than two to three such doses are to be given in a day (6).

For example, if the baby weighs about 10kg, he will get about 20mg (2mg x 10kg) of Zantac per dose, which amounts to about 60mg of Zantac in a day, in three doses.

The maximum dosage of Zantac for infants is at about 100mg per day, or as prescribed by the doctor (7). Zantac is often prescribed for two weeks (8).

Note that the dosage and duration can vary due to several factors such as the age of the baby, and the severity of the condition. The doctor will also let you know the best time to give the medicine (full stomach or empty stomach) and if the medicine can be combined with other medication (like gas drops or antacid).

Zantac is available in the form of syrup or effervescence tablet for babies. Syrups are easy to administer to older infants who may like the slightly sweet taste. Younger infants could be given effervescent tablets that dissolve in water. The water can be administered to the baby through a dropper syringe.

How Long Does It Take For Zantac To Work In Babies?

The time taken for the medicine to work depends on the severity of baby’s reflux. Ideally, a baby should get relief from reflux and GERD within two weeks from the day Zantac was first administered.

Are There Side-Effects Of Zantac On Babies?

Yes. Side-effects of Zantac include:

The side-effects are not many and usually disappear once the medicine has been discontinued.

The negative effects are significant among less than 2% of patients who take the medication (10). However, some may experience a few long-term side-effects of using the medicine.

Long-term side-effects of Zantac in babies:

Ranitidine seldom has any long-term effects on the baby’s health. However, if the baby is regularly given Zantac or if there is an overdose of the medication, then the baby runs the risk of the following long-term side-effects:

What If The Baby Is On Zantac But Still Spits Up?

If your baby continues to spit up despite using Zantac, then take him to the doctor immediately. This could indicate some other underlying condition or infantile diseases such as pyloric stenosis that causes the baby to spit up (14). Get your baby checked by a pediatrician in case of chronic spit ups that do not stop even with ranitidine.

1. Is Zantac Same As Prilosec And Prevacid?

2. Does Zantac Help With Gas In Babies?

There is no evidence that Zantac can provide babies relief from excessive gas. It may help ease the gas caused by acid reflux, but it does not treat gas directly. Ranitidine is primarily prescribed for GER and GERD.

Ranitidine is less likely to cause serious side-effects that have a long-term effect on the baby. Despite that, a baby’s doctor will choose Zantac as a last resort – when nothing seems to ease a baby’s reflux. Experts state that Zantac is safer than alternative medicines, but more research is needed to learn its true effects. For the safety of your infant, use Zantac only as and when prescribed by the pediatrician.

Have you used Zantac for your baby? Do let us know your experience in the comments section below.