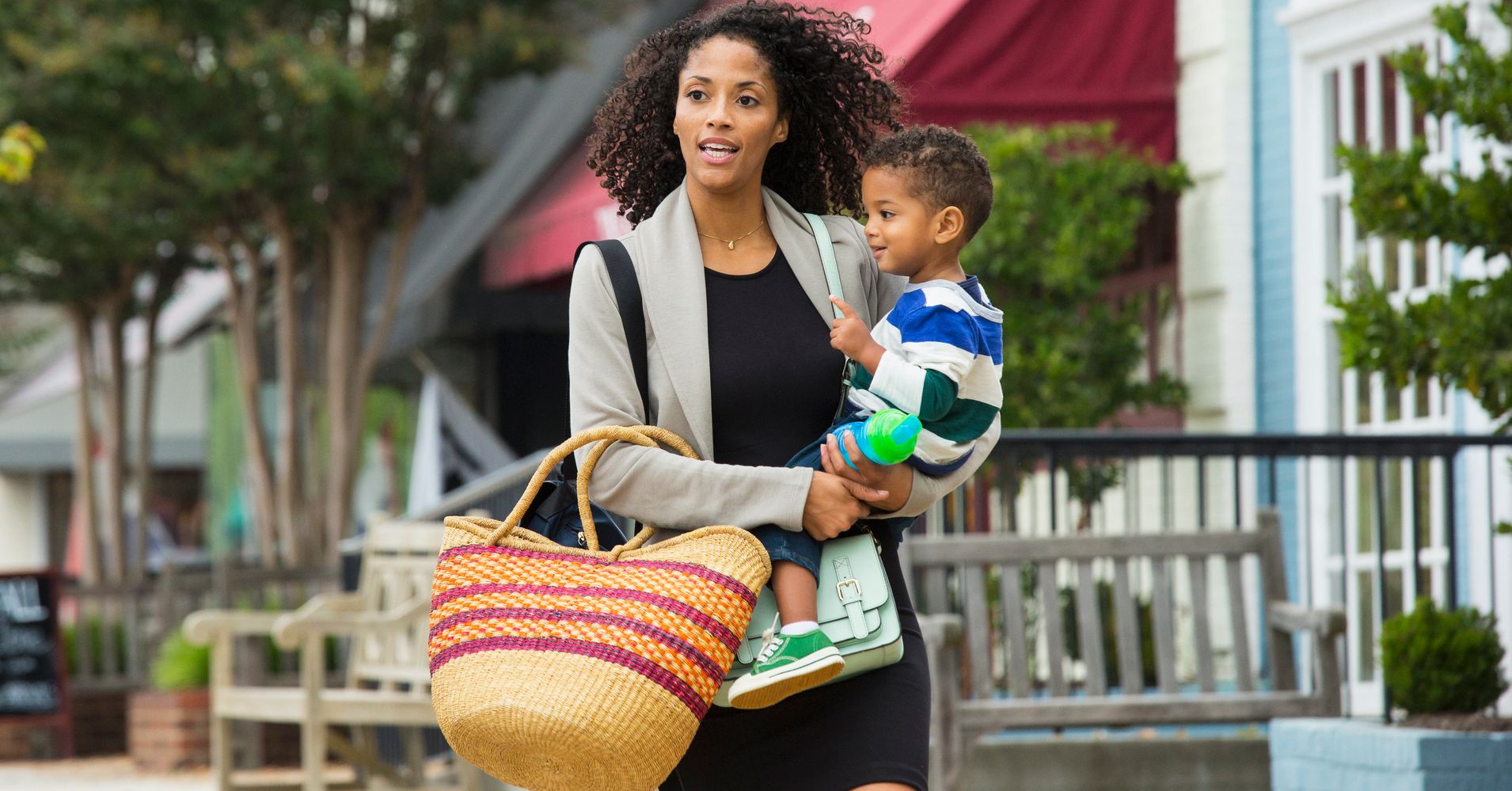 In July, tennis superstar Serena Williams tweeted that her daughter, Alexis Olympia Ohanian Jr., had taken her first steps ― and that it happened while Williams was training. A month later, she posted a photo on Instagram and wrote in the caption that she recently felt like she “was not a good mom.”

“I work a lot, I train, and I’m trying to be the best athlete I can be,” she wrote. “However, that means although I have been with [Olympia] every day of her life, I’m not around as much as I would like to be.”

If you’re a mom ― famous or not ― you’ve likely fallen victim to this sense of inferiority, also known as mom guilt. Williams’ tweet received more than 3,000 replies, many from mothers admitting they’d also missed their kids’ important milestones and were no strangers to the feelings of guilt the tennis star described. Whether it’s rooted in the time you’re not spending with your kids (at work or otherwise), the extraordinarily healthy food you’re not giving them or the picture-perfect photos of them you’re not posting on Instagram, it’s easy in our consumer-driven, hyper-aware culture to feel like you’re not doing a good enough job at this whole parenting thing.

We asked moms and researchers on motherhood to break down this all-too-common experience and offer tips on how to combat it.

Remember: Making time for yourself is a win for your family, too.

When asked about the last time she felt mom guilt, Ardenia Gould, a coach for working moms, admitted she was experiencing it right that second. She had plans the next day to go on vacation with friends, and was still putting blame on herself whenever her 7-year-old daughter asked about it. But it helped, she said, to explain to her daughter (and remind herself, too) that making time for herself is a win for both of them.

“I tell my daughter, ‘For you to see me taking care of me, I know that may not be the most fun thing for you, but I promise you that I’m a better mom when I get time to refuel and take care of myself because I can do a better job taking care of you,’” Gould told HuffPost.

In August, Maya Vorderstrasse, known for her funny letter board messages about motherhood, posted on Instagram about how she waited 19 months to get her hair done because every time she thought about it, she felt a pang of mom guilt. When she finally made herself go, she remembered the importance of self-care, not only for herself, but for her kids.

“I let myself believe that leaving my kids to do something for myself was neglecting them,” she wrote. “I had become invisible to myself, and that is a very dangerous hole to fall into.”

If you’re a working mom, your reason for heading to the office is valid ― whatever it is.

For moms who go back to work after having a child, the mom guilt can be “hugely conflicting,” as Michelle Kennedy, founder and CEO of Peanut (an app that helps mothers connect), put it.

“I want to be with my child, but I want to show my child that Mommy goes to work just like Daddy,” she told HuffPost, describing her thoughts after welcoming her son.

Although Kennedy loved her work, she hated the thought of missing her baby’s milestones as he grew, and she berated herself even more when she would travel for work. Even worse, she faced additional feelings of guilt about her job after becoming a mother.

“I felt guilty at work because I wanted to go back and show how it’s the same old Michelle,” she said. “I acted like motherhood hadn’t changed things, when in fact everything had changed.”

Kennedy encouraged moms to stop second-guessing their decisions to head back to the office if that’s where they want to be, and to understand that being a parent doesn’t make up their entire identity.

“Motherhood has become part of who you are,” she said. “It may be the best part, but it’s not the only part.”

Stop trying to live up to Hollywood’s take on the “perfect” mom.

When asked why she thought women often push themselves so hard, Liz O’Donnell, author of Mogul, Mom, & Maid: The Balancing Act of the Modern Woman, suggested turning to popular media to see what the so-called “perfect” mom looks like.

“We’re only one generation away from all of those TV moms that we grew up with: Carol Brady [from ‘The Brady Bunch’], Mrs. Cunningham from ‘Happy Days,’” she told HuffPost. “We’re bombarded, and still if you look at the sitcoms, mothers are perfect. That’s a big part of it.”

In more recent years, Hollywood has moved away from the perfect stay-at-home mom image and has perpetuated the trope of women “having it all” ― that is, being able to flawlessly balance their families and their careers. Katrina Alcorn, author of Maxed Out: American Moms on the Brink and mother behind the blog Working Moms Break, said she’s always taken issue with that three-word phrase.

“It sounds like we’re asking for some crazy indulgence, as if we’re planning to sit around binge-watching ‘The Americans’ and eating bonbons when really we’re just saying we want to be able to work and raise our families,” she told HuffPost via email. “The real problem with ‘having it all’ for a lot of women is it means ‘doing it all.’ And the fact is, none of us can do it all alone. We need support. It really does take a village.”

Nicole Rodgers, founder and executive director of Family Story, an organization that highlights the many different ways to be a family, passed along similar advice she got from her mom.

“My own mother always said to me that the best way to survive and thrive as a working mom is to get comfortable not giving 100 percent to everything all the time, and remembering that 80 percent is usually enough,” Rodgers said. “Throw away the idea of perfect, basically.”

O’Donnell, who also leads a site called Working Daughter, which offers tips for women balancing careers and caregiving, noted that social media has likely played a large role in how moms compare themselves to their peers. Celebrities showing off their “body after baby” photos have been joined by our own friends on Instagram serving up Pinterest-perfect birthday parties.

“Now we see our friends’ best moments,” O’Donnell said. “We’re coming home from work, putting on flannel pajamas, eating cereal for dinner, tired and overwhelmed. And our friend just had a birthday party. You ask yourself, ‘Why can’t I get it together?’ It’s not the celebrity we’re comparing ourselves to, it’s our neighbor and friend.”

One of O’Donnell’s go-to pieces of advice is for moms to lose the word “should” from their vocabularies.

Gina Cicatelli Ciagne, a certified lactation counselor and maternal and child health educator, had a similar take on the way social media influences how moms feel about their parenting.

“It’s a lot of smiles and sunny days but it’s also [a lot] of sleepless nights, messy clothes with spit-up and lots of crying jags,” she told HuffPost via email. “It’s all a part of the journey called life. Many want to only show the sunshiny moments. Just remember, everyone goes through the messy moments, too. When moms see milestones or other experiences it can cause competition and feelings of inadequacy.”

Give yourself room to flat-out mess up.

Gould remembers a time when mom guilt seemed to consume her. When her mother was diagnosed with stage 4 pancreatic cancer, Gould helped her through chemotherapy, going back and forth between Dallas and Houston. To make this work for her family, she often left her daughter with a relative.

“I was riddled with guilt,” she said. “I’d say to myself, ‘I don’t know if I’m doing this right. My child is a mess. I’m not home. I have an aging mom and a young daughter, and I’m not sure if I’m getting any of this right. I’m just trying to make the best decision day-to-day.’”

Gould said she has learned to give herself permission to make decisions without the fear of thinking she’s a terrible mother. Just a few days ago, she shared on Instagram a story in which she arrived at her daughter’s recital after an important meeting with only five minutes left. Instead of beating herself up about it, she gave herself the credit she deserved.

Parenting is harder than ever, and there’s no one way to do it right. So on Nov. 2, HuffPost Life will convene a community of people trying to figure it out together at our inaugural HuffPost Parents conference, HOW TO RAISE A KID. In advance of the event, HuffPost Parents will publish stories on topics that matter deeply to parents of children who are starting to navigate the world on their own: bullying; sex, consent and gender; money; their digital lives; and how to raise compassionate, self-sufficient, creative, emotionally intelligent children. In short — kids who aren’t assholes. View the event site here and be sure to follow HuffPost Parents on Facebook, Twitter and Instagram, and subscribe to our newsletter, How Not To Raise A Jerk.