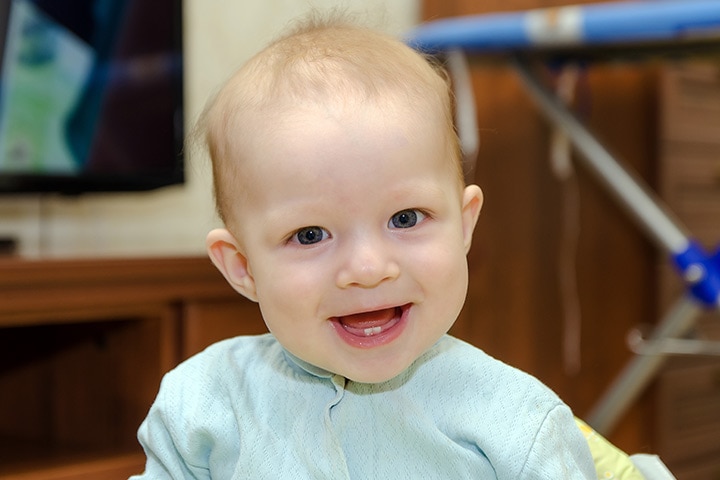 A baby starts forming its first teeth when it is just a six-week-old fetus in the womb (1). The teeth develop in the gums and are not usually visible until they are fully formed, months after the baby is born. But sometimes, the baby is born with a pair of teeth that you can see.

These teeth are called natal teeth and are a rare occurrence. In this post, Momjunction tells you what natal teeth are, what causes their formation, and how they affect the baby’s health and overall development.

What Are Natal Teeth And Are They Common?

Natal teeth, which are highly uncommon, are teeth that are present when the baby is born (1). The probability of a child being born with natal teeth can range from one in 7000 to one in 30,000 based on different studies (2). Usually, there are no more than three natal teeth, and the chances of an infant having natal teeth are the same, irrespective of gender.

Can Natal Teeth Cause Problems To The Baby?

Yes. Natal teeth may cause complications such as:

How Are Natal Teeth Removed?

Surgery is the only way to remove natal teeth. Keep reading for more information on the procedure (11):

The pediatric dentist decides whether or not to remove natal teeth, after examining the extent of their interference in baby’s growth and development. If the teeth are strongly rooted and have no impact on baby’s feeding, then surgery may not be required.

About 90-99% of natal teeth are primary teeth that have emerged before time. Only 1-10% are supernumerary teeth, or extra teeth in the mouth.

What Are The Types Of Natal Teeth?

The following are the four types of natal teeth (3):

Can Any Teeth Erupt As Natal Teeth?

Only the below-mentioned teeth emerge as natal teeth (4):

Why Are Some Infants Born With Teeth?

The following are the most common reasons for babies having natal teeth (5):

What Is The Difference Between Natal And Neonatal Teeth?

[ Read: How To Soothe Sore Gums In Babies ]

The two can happen together, but it is an extremely rare condition. The emergence of the two in succession is mainly observed in complex congenital genetic disorders.

Natal teeth often come across as alarming and disconcerting to the parents. However, the condition is benign and treatable without complications. If the baby has no problem with the teeth, the doctor may leave them intact. There is no harm even if the teeth are removed, for the baby will anyway develop permanent teeth later in life.

Did your baby have natal teeth too? Tell us about your experience in the comments section.