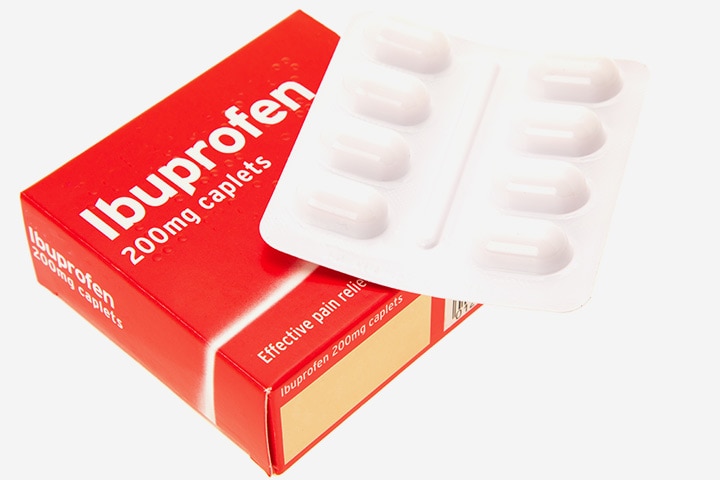 Whether it is a headache, a pain in the neck, swelling or fever, ibuprofen is the medicine you reach out for. It is an over-the-counter (OTC) drug widely used because of its ability to subdue high body temperatures and provide relief from pain. But is it safe to use when you are breastfeeding? Can ibuprofen get into the breast milk and affect the baby’s health?

Keep reading this MomJunction article for information about ibuprofen while breastfeeding, the right dosages and precautions to take.

Ibuprofen is a nonsteroidal anti-inflammatory drug (NSAID) that helps reduce pain, inflammation, and fever (1). The medicine is sold under popular brand names Advil and Motrin. It is also prescribed for conditions such as arthritis and severe menstrual pain.

Ibuprofen mostly has non-prescription usage and can be purchased over the counter for treating a range of issues from reducing respiratory inflammation during cold, alleviating a headache, and providing relief from a toothache.

The extensive uses of ibuprofen and easy availability make it one of the ‘essential medicines’ for pain relief according to the World Health Organization (2). So the chances are that you could take this medicine at least once during your lactation period. That brings us to the important question.

Is It Safe To Have Ibuprofen While Breastfeeding?

Yes. It is safe to take ibuprofen when you are breastfeeding, provided you don’t have asthma or stomach ulcer (3). The medicine is on the American Academy of Pediatrics’ list of drugs suitable for breastfeeding moms and has no known adverse effects on the baby’s health (4).

Ibuprofen is often the preferred NSAID as it is highly protein-bound and is not easily transferred into breast milk (5). Ibuprofen is the only nonsteroidal anti-inflammatory drug that is safe for use among children and is also given to infants above the age of six months (6) (7).

Concentration Of Ibuprofen Transferred To The Breast Milk

A study revealed that four doses as high as 400mg each of ibuprofen in a day (1600 mg/day) led to less than 1mg of the drug to pass into the breast milk (8). The amount is highly insignificant considering the ingested dosage. But in some cases, even small quantities of medicine in the breast milk could become a concern.

Does Ibuprofen Have Any Side Effects On Breastfeeding Babies?

Ibuprofen is unlikely to have any side-effects on a baby, as the medicine passes into milk in negligible quantities (9). Research states that ibuprofen’s strong affinity towards blood plasma proteins reduces its ability to bind with milk proteins, minimizing the chances of it passing to the baby. It is 99% protein bound and remains in your blood, with just an insignificant amount diffusing into the breast milk (10).

If any, the general side effects of ibuprofen are similar to what can occur when the baby is administered ibuprofen directly (11).

Common side effects include

Severe side effects could be

The severe side effects are rare and likely to show in case of an overdose. The American Academy of Family Physicians states that adverse side effects mostly occur due to prolonged maternal use of ibuprofen (12). Make sure you only have the medicine in prescribed doses.

How Much Of Ibuprofen Is Safe For A Breastfeeding Mother?

The maximum dosage of ibuprofen depends on whether you buy an over-the-counter version or one prescribed by the doctor.

Also, check the label for the maximum drug dosage suggested by the drug manufacturer. Limiting the dosage to 1200mg a day is likely to release less than 1mg of ibuprofen into the breast milk, which will not harm the baby (8).

Prescription ibuprofen: Doctor-prescribed tablets are likely to contain 200mg to 800mg of ibuprofen. The dosage frequency entirely depends on the doctor’s suggestion. The maximum limit of prescription ibuprofen is 3200 mg per day, which is a maximum of four 800 mg tablets in a day (14).

Doctors usually do not prescribe high doses of ibuprofen for lactating mothers and may stick to a maximum of 1600-2400mg per day. You may also be prescribed a slow-release version of ibuprofen to be taken once or twice a day, with a 10-12 hours gap between two doses (15).

Overdosing is highly unlikely if you take prescribed ibuprofen. Avoid using OTC ibuprofen, but if you have to take it, stick to the suggested limit. Consult the doctor for alternatives, if the drug doesn’t provide relief as expected.

When Should A Breastfeeding Mother Avoid Ibuprofen?

Avoid taking ibuprofen without a doctor’s consent if (16):

Tips For Ibuprofen Usage While Breastfeeding

Ibuprofen is one of the safest medicines you can have when you are lactating. But as you would with any other medication during lactation, stick to the recommended dosages to avoiding any adverse effects on the baby. Consult a doctor if you not sure how to administer over-the-counter ibuprofen or have doubts. Staying within the limit and being watchful for any side effects on your little one is critical for safe ibuprofen usage when breastfeeding.

Rohit Garoo took writing as a profession right after finishing his MBA in Marketing. Earlier he graduated with a Bachelor’s degree in Botany & Zoology from the autonomous St. Xavier’s College in Mumbai. This botanist-zoologist turned writer excels at life sciences, and at MomJunction he writes everything about pediatrics and maternal care. In between writing and being overly curious, he spends time cooking, reading, and playing video games. LinkedIn profile – linkedin.com/in/rohit-garoo-263115aa
Share on Facebook
Share on Twitter
Share on Pinterest
Share on LinkedIn