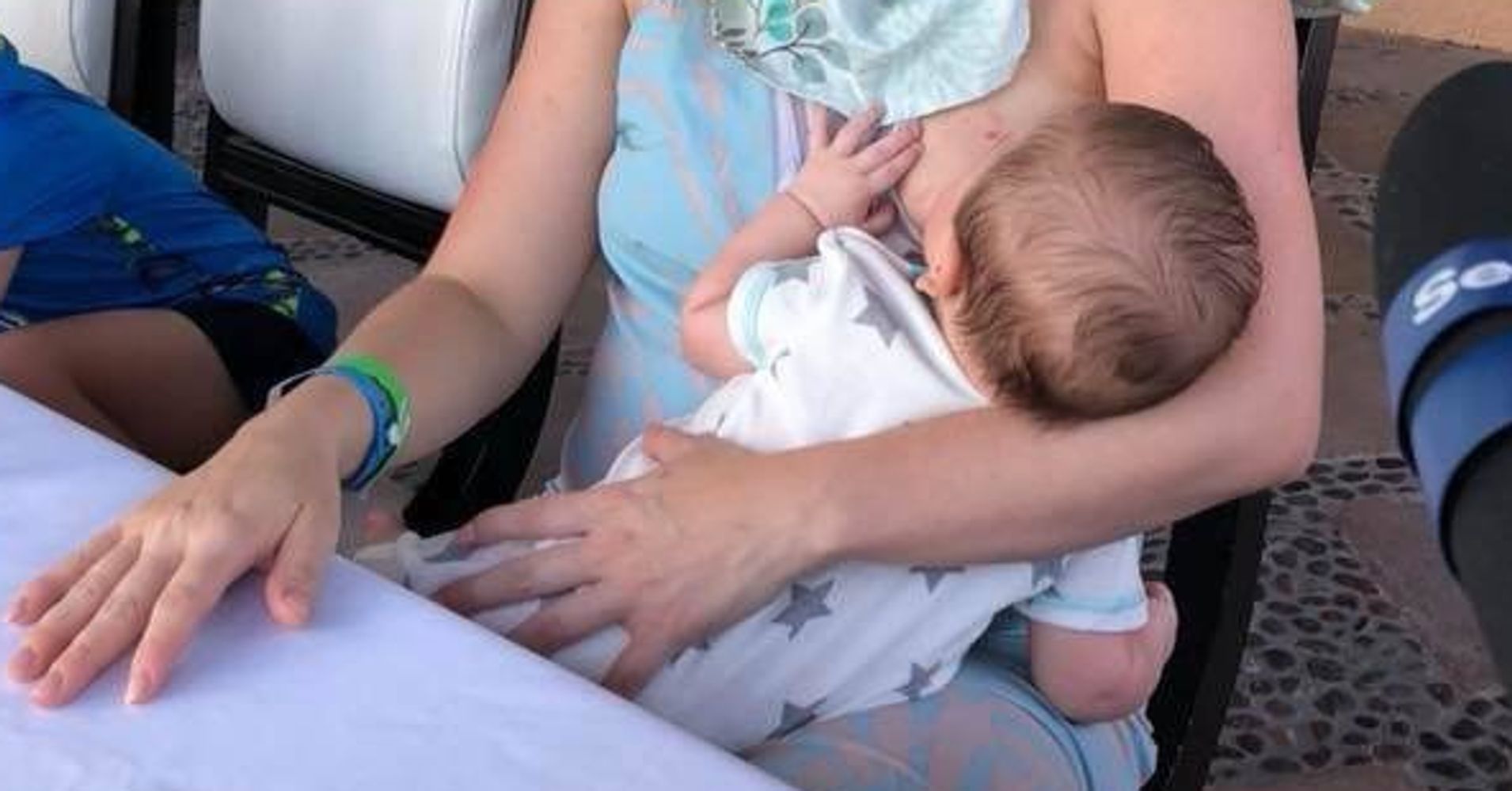 A breastfeeding mom who was asked to “cover up” at a restaurant did so with a comedic flourish that has the internet in hysterics.

Last week, Facebook user Carol Lockwood shared a photo of Melanie Dudley nursing her 4-month-old baby in a hotel bistro with a blanket completely covering her head. “A friend’s daughter-in-law was told to ‘cover up’ while feeding her baby, so she did!” stated the post with 90 thousand reactions, 12 thousand comments, and 169 thousand shares. “I’ve never met her, but I think she’s AWESOME!!! (Please share! With permission, I’ve made this post public — I’m SO over people shaming women for nursing!!!”

Lockwood wrote, “PS: To reduce speculation: it was a man who asked her to cover up, it was 90 degrees and extremely humid, and, no, she wasn’t in a Muslim country disrespecting traditions.”

As with most cases of public breastfeeding, people shared their opinions:

Dudley, 34, a stay-at-home mother from Austin, Texas, who also has 4-year-old twins, tells Yahoo Lifestyle that the move was spontaneous. “I was on vacation in Cabo San Lucas with my entire family and a man asked me to cover myself,” she says. “I’m usually discreet, but we were seated in the back of the restaurant.”

In response, Dudley asked her husband to hand her a cover, then threw it over her face right before he snapped a photo.

Other women have issued creative replies when facing shame for public nursing. In 2017, Nicolle Blackman gave the same response when a female stranger, concerned with her husband’s wandering gaze, asked her to cover up in a Washington state McDonald’s.

Breastfeeding Mom Takes A Literal Approach To Being Asked To Cover Up https://t.co/EMiHppguVx pic.twitter.com/Q3ANG3y3nK

“I was very annoyed when she said that,” Blackman told the U.K. Independent. “Why would I cover up my son? He holds his breath when he’s covered.”

“I’m hoping to help other women by speaking out about it to encourage them to stand up for their children,” she said. “Just do whatever is best for them. If they want to cover that’s fine, if they don’t that’s fine too.”

Four months earlier, according to Today, new mom Avery Lane of Fort Gordon, Ga., who was asked to “cover up with a towel or something” while nursing her newborn at H&R Block, responded, “No, but I have a muslin if you would like to cover your face. You must not know Georgia’s breastfeeding laws.”

Dudley’s response is perfectly appropriate given that August is National Breastfeeding Month, of which the first week is reserved for World Breastfeeding Week. Both observances highlight the benefits of nursing and generate support for women who choose to do so.

Public breastfeeding is legal in all 50 states. However, awareness is generally lacking — in June, an Oregon doctor asked a nursing mother to cover herself up during an appointment to “prevent lawsuits from something inappropriate” occurring (the mother responded by hiring a lawyer), and last week, police in New Jersey were called on breastfeeding Michelle Ayala, who was feeding her 2-year-old in a public park. “He said, ‘I support you completely, thank you for your time, your patience,’” Ayala said of the responding officer, according to NBC New York.

Dudley says that although her photo has received some negativity, it’s also built momentum for mothers who choose to breastfeed publicly. “Breastfeeding is hard enough,” she tells Yahoo Lifestyle. “This is another layer we don’t need to deal with.”